Travis Wall Improvs a dance for MOVE in NYC...

Travis Michael Wall (born September 16, 1987, Virginia Beach, Virginia), an American dancer and dance instructor specializing in contemporary dance and jazz dance. He is best known for his 2006 appearance as a competitor on the second season of the television show So You Think You Can Dance, which airs on the Fox Network. As of 2009, he is currently a choreographer for the show. In 2011, he was nominated for an Emmy for his work on the show's seventh season.

So You Think You Can Dance(SYTYCD)
In 2006, at the age of 18, Wall competed on the second season of the show So You Think You Can Dance (SYTYCD), making it to the final four contestants and coming in second place to overall winner Benji Schwimmer. Wall was praised by the judges as the most technically talented dancer in the competition. Nigel Lythgoe and Adam Shankman have listed Wall, his brother Danny Tidwell, Season 4's Will Wingfield and Season 5's Kayla Radomski as the most talented dancers on the show.

While on the show, Wall danced in Mia Michaels "The Bench" routine for which she later won an Emmy for Outstanding Choreography. During the Fall of 2006, Wall toured the United States with the top 10 dancers from the So You Think You Can Dance competition. He returned to the show in 2008 during the Season 4 auditions to teach choreography. He did a surprise audition on the 4th episode as "Danielle Chorizo".

On July 23, 2009, Wall returned to So You Think You Can Dance along with fellow Season 2 contestant Heidi Groskreutz on the 100th episode of the show, to perform their Emmy award winning piece "The Bench" choreographed by Mia Michaels... 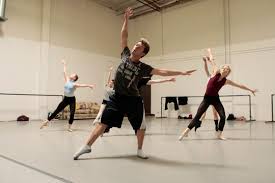 Congratulations on the new "profiles" with details and information about these incredible "MOVErs."