Terry Beeman is a renowned choreographer, director, dancer, and master teacher, whose name associates with artistry and passion to dancers coast-to-coast and worldwide. Terry's many talents open him up to knowledge that extends through not only dance, choreography, stunt and aerial work, acting and theater, but also narrating, directing and producing, music and film editing, and costume design. His resume keeps growing and growing throughout the years with new films, national commercials and theater productions.

He can be seen in commercials for TARGET BACK TO SCHOOL, RADIO SHACK, GMC ENVOY, VISA with BeBe Neuwirth, PEPSI, AT&T WIRELESS, MILLER BEER, and DIET COKE with the pop star Paula Abdul. He was the head choreographer beside Ms. Debbie Allen for the NBC hit show FAME in the summer of 2003. His television award show credits include 4 ACADEMY AWARDS, 2 MTV AWARDS, THE GRAMMYS, THE EMMYS and THE AMERICAN MUSIC AWARDS.

Film credits include "SHOW GIRLS," in which he played the principle role of "Felix", and partnered both with Gina Gershion and Elizabeth Berkley, and a dancer in the sequel "BATMAN and ROBIN". In the blockbuster hit "ERASER", starring Arnold Schwarzenegger, Terry was cast as a dramatic drag queen, and has proven his versatility with fight scenes and stunt work in the latest independent film "SLEDGE".

Terry Beeman has had the opportunity to travel the world with some of the biggest names in the industry, Angel's Advocate Tour with the Legendary Mariah Carey, super star Paula Abdul, during her "UNDER MY SPELL" tour and Mega Pop Diva Whitney Houston in her"THE MOMENT OF TRUTH" tour.

In the print and fashion market, Terry has worked with master photographer Herb Ritts, in a DKNY campaign, and has performed live for GUCCI, GAP, ADIDAS, LA GEAR, STARTER, SKETCHERS, REEBOK, and many inspiring Fashion Designer in Los Angeles.

As an international artist, Terry took Italy by storm while starring in RAI UNO's "FANTASTICO 8", and "STA SERA LINO", setting a new trend of dance, and gracing the covers of many Italian magazines, gossip papers and TV guides. He is considered the most popular male star dancer to date, partnering with beautiful showgirls Heather Parisi and Lorella Cuccarini.

After returning to the United States, he was asked back to choreograph and star as "Primo Ballerino" in Channel 5's "FINALMENTE VENERDI", and later, for The show "A TUTTA FESTA" with Ms. Cuccarini. He continues to be Italy's favorite master class teacher and gets invited every year for Special Performances.

Terry's latest project, "MENTAL HEAD CIRCUS" at the King King in Hollywood is a sinister night of Vaudeville antics, twisted mayhem and aerial hoopla blended together with contemporary movement and classic shenanigans. 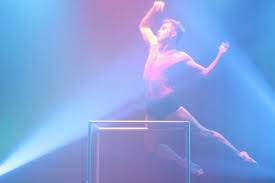 Export to Outlook or iCal (.ics)

Promoted it!
3 members promoted this