Galen Hooks shares her favorite moment of being a dancer...

Galen is best known for being one of Janet Jackson's dancers, for her Nike campaigns, for being a dancer and choreographer for The LXD (The Legion of Extraordinary Dancers), and for playing Diamond Eye and Pretti Sinclair in recording artist Ne-Yo's "Beautiful Monster", "Champagne Life", and "One in a Million" music videos. Hooks was a songwriter on recording artist Raistalla's self-titled album. Galen wrote "Krazy" and co-wrote "Attention" and "Speedracer". As a photographer, she has taken pictures of Melinda Sullivan from So You Think You Can Dance and Lindsey Blaufarb from Beat Freaks who appeared on the third season of America's Best Dance Crew. 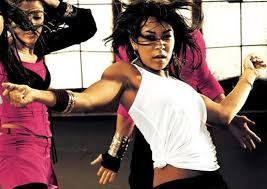 Seeing and hearing the passion of this talented young woman was a highly emotional experience. What her body can do is one thing, but what her heart and creativity can do is a thousand-fold. An Olympics for Dance? Whoa. If we think that the Grammys have too many categories, an Olympics for Dance would go on non-stop for about one month. Not a bad thing at all. Thanks Kurt and Melinda, this clip MOVE-d me greatly. TED TALKS posted our video on their blog, check it out :-)

TED TALKS posted: "This piece really captures the possibility of human impact and connection that can happen at the TED conference, and this is something that's very hard for us to explain..." Check out our MOVE TV video on http://blog.ted.com, Please share from there!

wrote: Cre­ativ­ity, inno­va­tion and inspi­ra­tion comes in many forms. It doesn’t require a sci­en­tist or an inven­tor or an ethi­cist. Some­time, the sheer plea­sure of being present to the thing you love doing most makes for the most tran­scen­dent of moments.Here, Galen Hooks of The LXD, one of my favorite dance crews, speaks of danc­ing at TED 2010. She’s obvi­ously deeply moved, even a year after the expe­ri­ence. She under­stands the power of the thing she does and how it can affect people. Watch and enjoy... Stephen Collins

Have been following Galen's career for some time now. I was moved by Galen's comments and feel her passion. She is a true embassidor for dance and a great talent. Through her hard work and dedication I am sure that dance will get the recognition it deserves. Keep up the great work Galen, you have more followers than you probably realise and I am one of them. Regards.xx.

Galen's interview brought me to tears.  She embodies what it means to be a dancer and an artist.   We must create other places / events where dance can have it's moments to shine.    It truly is the universal language that moves  people from all walks of life.